CSF progranulin increases in the course of Alzheimer's disease and is associated with sTREM2, neurodegeneration and cognitive decline 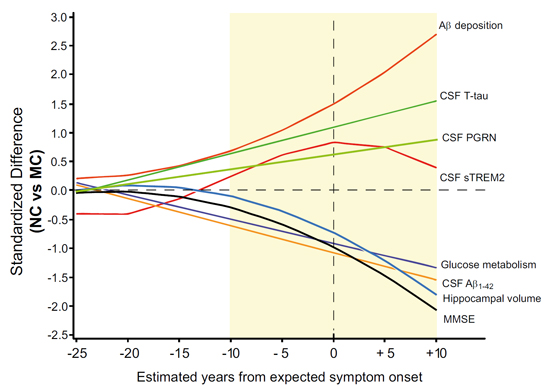 Progranulin (PGRN) is predominantly expressed by microglia in the brain, and genetic and experimental evidence suggests a critical role in Alzheimer’s disease (AD). We asked whether PGRN expression is changed in a disease severity-specific manner in AD. We measured PGRN in cerebrospinal fluid (CSF) in two of the best-characterized AD patient cohorts, namely the Dominant Inherited Alzheimer’s Disease Network (DIAN) and the Alzheimer’s Disease Neuroimaging Initiative (ADNI). In carriers of AD causing dominant mutations, cross-sectionally assessed CSF PGRN increased over the course of the disease and significantly differed from non-carriers 10 years before the expected symptom onset. In late-onset AD, higher CSF PGRN was associated with more advanced disease stages and cognitive impairment. Higher CSF PGRN was associated with higher CSF soluble TREM2 (triggering receptor expressed on myeloid cells 2) only when there was underlying pathology, but not in controls. In conclusion, we demonstrate that, although CSF PGRN is not a diagnostic biomarker for AD, it may together with sTREM2 reflect microglial activation during the disease.