Frontotemporal lobar degeneration (FTLD) is associated with cytoplasmic or nuclear deposition of the TAR DNA binding protein 43 (TDP-43). Haploinsufficiency of progranulin (GRN) is a major genetic risk for FTLD associated with TDP-43 deposition. Therefore understanding the mechanisms, which control cellular expression of GRN is required not only to understand disease etiology but also for the development of potential therapeutic strategies. We identified different GRN transcripts with short (38-93 nucleotides) or long (219 nucleotides) 5'-untranslated regions (UTR) and demonstrate a cellular mechanism, which represses translation of GRN mRNAs with long 5’-UTRs. The long 5’-UTR of GRN mRNA contains an upstream open reading frame (uORF), which is absent in all shorter transcripts. Since such UTRs can be involved in translational control as well as mRNA stability, we compared the expression of GRN in cells expressing cDNAs with and without 5'UTRs. This revealed a selective repression of GRN translation and a reduction of mRNA levels by the 219 nucleotide long 5’-UTR. The specific ability of this GRN 5’-UTR to repress protein expression was further confirmed by its transfer to an independent reporter. Deletion analysis identified a short stretch between nucleotides 76 and 125 containing two start codons within one uORF, which is required and sufficient for repression of protein expression. Mutagenesis of the two AUG codons within the uORF is sufficient to reduce translational repression. These findings therefore suggest a mechanism, where initiating ribosomes are either stalled at the AUGs of the uORF or leaky scanning leads to inefficient translation of GRN. 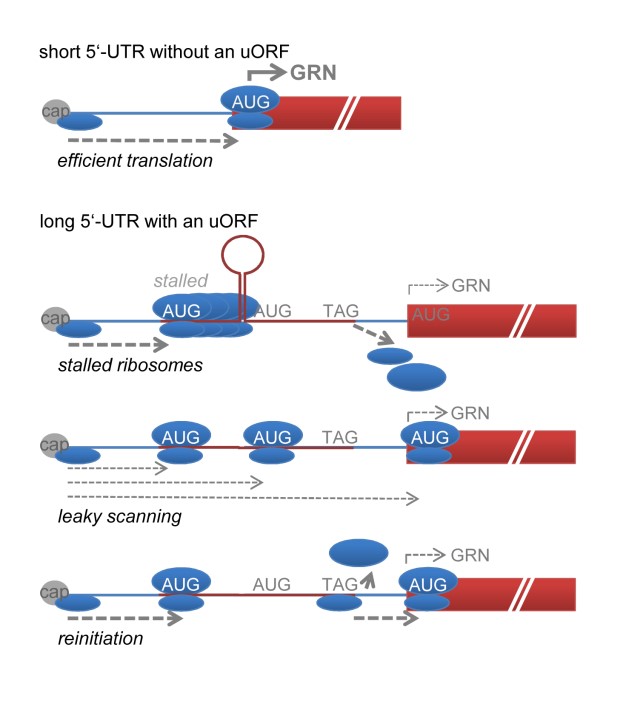