Munich/ Bonn, 9th January 2014. This evening, Professor Christian Haass has been awarded the Federal Cross of Merit by the Bavarian Minister of State for Education and Cultural Affairs, Science and Arts Dr. Ludwig Spaenle. “Professor Haass has done great service for the good of all with his outstanding performance in the fields of science and research and his dedication to the university city of Munich,” says the Bavarian State Minister’s laudation. Christian Haass is the spokesman of the DZNE site Munich and holds the chair in Metabolic Biochemistry at the LMU Munich.

“Christian Haass has had a major impact in Germany on the molecular research on Alzheimer’s disease ”, is how State Minister Spaenle paid tribute to Christian Haass. “It is thanks to Haass that Munich is today an internationally renowned centre of excellence in research on neurodegeneration”. Spaenle highlighted Haass’ success in setting up a new research focus founded by the German Research Foundation (DFG) and emphasised his dedication to the German Center for Neurodegenerative Diseases (DZNE), through which he made a major contribution to the establishment of the DZNE site Munich. State Minister Spaenle also honoured Haass’ efforts to inform the general public about Alzheimer’s disease and dementia.

Professor Christian Haass is delighted by this accolade: “It is important for me that we as scientists have a social function besides performing research. Our work is not just about accumulating knowledge or promoting one’s own career; we also have to ensure that our research improves people’s lives and that we pass on our knowledge and insights.” To this end, Haass works at the DZNE and the LMU Munich developing cooperative projects between these institutions such as the DFG cluster of excellence SyNergy. “The close cooperation between various disciplines and faculties will help to improve our understanding these severe diseases and to conquer them. At the same time, these institutions allow me to offer gifted young scientists an excellent research platform and attract talents – this is my personal social task.”

Prof. Dr. Dr. Haass studied biology at Heidelberg University, where he received his doctorate in 1989. He subsequently went to Harvard Medical School, where he was appointed Assistant Professor of Neurology in 1992. From 1995, he directed the Department of Molecular Biology at the Central Institute of Mental Health (ZI) in Mannheim. In 1999, he was appointed Professor of Metabolic Biochemistry at the LMU Munich. That same year, Prof. Haass established the DFG’s research focus “Cellular Mechanisms of Alzheimer’s Disease”, thus creating Germany’s first national research network into Alzheimer’s disease. In 2000, he became spokesman for the DFG’s Collaborative Research Centre “Molecular Mechanisms of Neurodegeneration”. Christian Haass has received several awards, including the DFG’s “Gottfried Wilhelm Leibniz” prize, the “Ernst Young Prize for Medicine”, the “Potamkin” prize from the American Academy of Neurology and an honorary doctorate from the University of Zurich.

The German Center for Neurodegenerative Diseases (DZNE) investigates the causes of diseases of the nervous system and develops strategies for prevention, treatment and care. It is an institution of the Helmholtz Association of German Research Centres with sites in Berlin, Bonn, Dresden, Göttingen, Magdeburg, Munich, Rostock/Greifswald, Tübingen and Witten. The DZNE cooperates closely with universities, their clinics and other research facilities. Co-operation partners in Munich include the Ludwig-Maximilians-Universität (LMU). Website: www.dzne.de/en 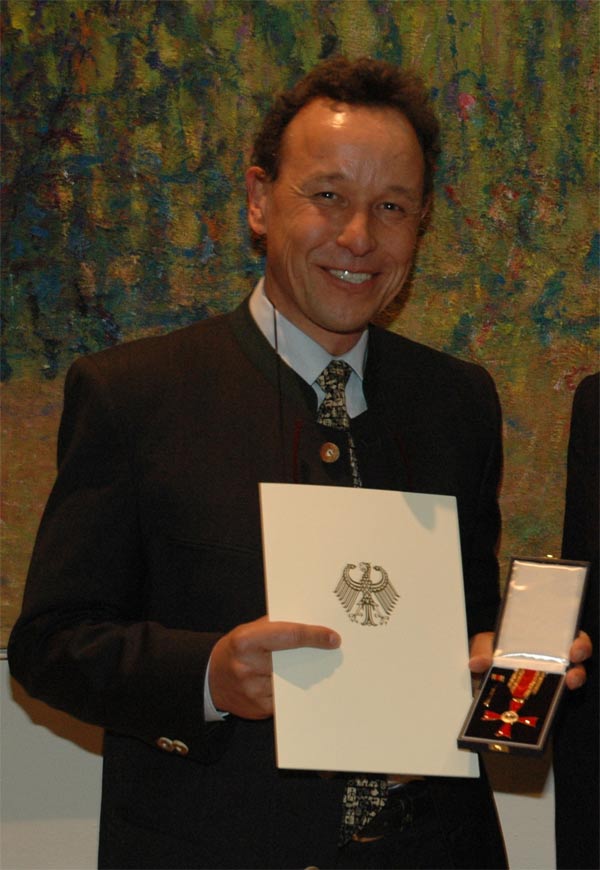 Photos of the event will be available from the website of the Bavarian State Ministry of Education and Culture, Science and Art, and can be downloaded free of charge from: http://www.km.bayern.de/ministerium/minister/bilder.html
Contact:
Sonja Jülich-Abbas
Deputy Press Spokesperson
DZNE
0228 / 43302-263
sonja.juelich-abbas@dzne.de