The zebrafish group uses the advantages of the zebrafish, Danio rerio, as an in vivo model to study the cellular and molecular mechanisms of neurodegenerative diseases such as Alzheimer’s disease (AD), Amyotrophic Lateral Sclerosis (ALS), and Frontotemporal Lobar Dementia (FTLD).

In order to recapitulate features of AD and other Tau related diseases, we generated a transgenic zebrafish expressing Tau protein Tg(TauP301L). The Tau transgenic fish recapitulates all hallmarks of tauopathies including hyperphosphorylation, conformational changes, aggregation, and most importantly neuronal cell death. In vivo imaging with a Tg(mito:CFP) reporter fish revealed that axonal mitochondrial transport is severely impaired in Tg(TauP301L) fish. Amyloid ß-peptide (Aβ) is generated through proteolytic processing of the Amyloid precursor protein (APP) through sequential cleavage by β-site cleaving enzyme (BACE1) and γ-secretase. We generated BACE1 and BACE2 knock out fish to identify their biological functions and to anticipate possible side effects upon therapeutic BACE1 inhibition. In addition novel substrates were identified molecularly by quantitative mass spectrometry analysis. We will further generate APP loss of function mutants to investigate the in vivo function of APP in zebrafish. 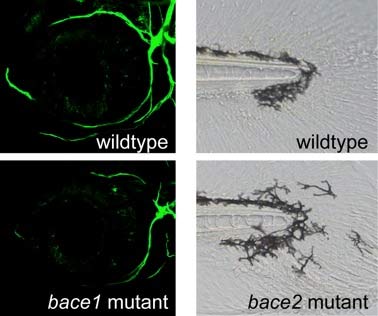 ALS and FTLD belong to a disease spectrum, which shares significant overlap in genetics and pathology. We investigate loss of function mutants generated by genome editing of TDP-43, Progranulin, Fus, and the zebrafish orthologue of C9ORF 72 to gain insights into the in vivo function of these genes. We further generate transgenic zebrafish expressing genes with disease-associated mutations or the C9ORF72 associated repeat with the aim to obtain zebrafish disease models for subsequent analyses of pathomechanisms of ALS and FTLD in vivo. These models will further be valuable tools to test therapeutic strategies. 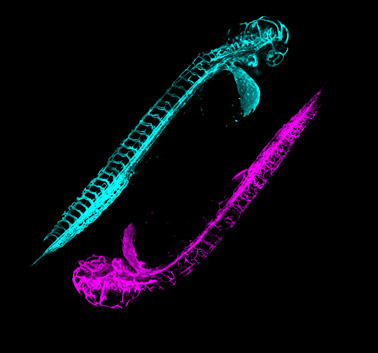